The patches for the bug Meltdown and Spectre may be performance critical for certain workloads. This is particularly crucial for data centers and HPC workloads.  Researchers started to investigate the impact on HPC workloads, so for example, looked at the performance of IOR and MDTest showing that MDTest is severely impacted. This suggests that applying the patch may impact performance intercomparison efforts such as by the IO-500 list which aims to track storage performance across file system and time. To do so, a measurement procedure and scripts are provided.

At the German Climate Computing Center (DKRZ), a RedHat Enterprise 6 Linux is used and also affected by the Meltdown and Spectre CPU bugs. A relevant question was how much will these bugs affect the IO-500 measurements. However, measurement of the impact is not easy in this setup as all nodes of the test system have been updated with the new kernel and this update comes along with an update of the Lustre client code that resolves several issues on the DKRZ system.

Note that a new post with statistically better analysis is available here.

A first measurement of the impact

A first and simple approach that fits into the current situation has been conducted as follows:

12 processes are started using srun, i.e., 12 times the number of files or data volume is actually used. Each individual benchmark run takes about one second to run; since the throughput and metadata rate is very high, the main memory is quickly full not allowing to run the benchmarks for larger settings.

Boxplots for IOR are shown in the following diagram, i.e., the first and third quartile of the 50 measurements comprise the box and the median is the vertical lines, whiskers and outliers are shown: 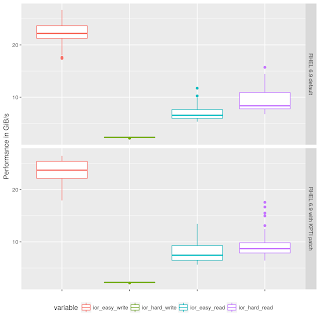 There are quite some outliers due to the short runtime and the short wear-out phase of IOR, but in general the picture looks similar: There is no significant observable performance degradation to this benchmark.

Results for MDTest in this diagram behave generally similar, too: 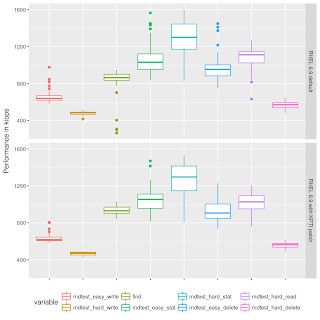 Now, we compute the mean(patched)/mean(unpatched) for each performance number in the order as reported by the IO-500:

ior_easy_write = 1.062
Thus, the measurement in the patched version is 6% slower.

The values suggest that the patched version is actually often a bit faster, and a t-test confirms that in some cases, but take these numbers with a grain of salt as this quick measurement is biased:
However, it does show that the kernel update is not too worrisome; the values measured are similarly and not up to 40% slower as indicated by the paper cited above. Since Lustre is significantly slower than tmpfs, the impact on it is anticipated to be low. Certainly, the measurement should be refined and conducted on the same node to remove that bias and it should be repeated more often.

Email security with Postfix/DKIM/DMARC on Ubuntu 20.04

A while ago, I had setup DKIM on my Ubuntu 20.04 server with Postfix.  In a nutshell,  DomainKeys Identified Mail (DKIM)   provides means to...